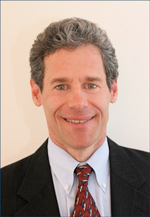 After serving an internal medicine internship in San Francisco in 1984, Dr. Ehrlich returned to Philadelphia to complete his ophthalmology residency at the world-renowned Wills Eye Hospital (1984-1987). Next, he served a fellowship in corneal and refractive surgery at the Jules Stein Eye Institute, UCLA School of Medicine. (1987-88). Each year US News and World Report surveys physicians and asks them to rank the best hospitals in their specialties. For more than twenty years both Wills Eye Hospital and the Jules Stein Eye Institute have ranked in the top 5 eye hospitals in the nation.

The outdoor Colorado lifestyle is a natural fit for Dr. Ehrlich, who is an avid runner, skier, and fly-fisherman. He is married to his high school sweetheart, Diane, and has college boy-girl twins, Jordan and Alexis.

Dr Ehrlich has performed over 18,000 cataract surgeries. He was an FDA investigator for the Crystalens that was approved for use in the United States. Today he uses many specialty lenses (Toric and Multifocal) to improve near and distance vision for his cataract patients. He also performs many other surgeries such as blepharoplasty, entropian and pterygium.

He performs LASIK surgery as well and enjoys the freedom it offers personally, having had the procedure in 2001. He wrote a book on LASIK in 1999, How to See Like a Hawk When You’re Blind as a Bat, which was favorably reviewed in the Los Angeles Times in 2000.

Join us on Social Media: